This is going to be an unusual blog, not that most of my blogs aren’t unusual.  This blog will give you a glimpse into the mind of an engineer.

As some of you may know, I am a sailor.  Last year I was offered a free Hobie Cat to use for the summer.  I immediately jumped on the offer and put it on the beach at 58th Street, the last street to the north that has a sea wall.  Nestling the boat against the seawall was nice until the past round of Northeasters hit the oceanfront.  The sand was pushed up to the top of the seawall and almost completely covered the boat.  All I could see was a small amount of the trampoline showing with two bits of bow sticking out.

A normal person would solve the problem of extracting the boat by digging it out, and that is how I started.  After digging for about an hour I projected at least another three to four hours of digging to get the boat clear.  To make matters worse there were boats on either side of my boat, so I did not want to pile sand on the other boats.

I was taking a break from the digging and spied a 4 x 6 timber that was flotsam from the recent storm.  That’s when my engineering brain kicked in.  As Archimedes once said, “Give me a lever long enough and I can move the world.”  Well, I did not have to move the world, just a Hobie Cat. After several rounds of digging for access and using my lever, the boat was free of the sand.  The total time using the lever was 30 minutes; much less than the 3 more hours of digging I had projected!

So as you can see, using an engineering mindset can be very helpful at times.  I will conclude this blog with a statement from my wife Ellen, “being married to an engineer is wonderful, they can fix anything.”  Well, we can at least make the task easier. 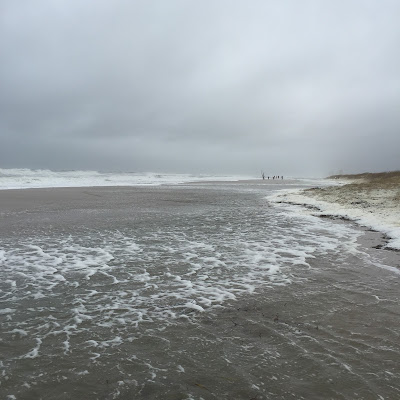 Posted by Unknown at 1:46 PM No comments: